The text editor gives full access to all capabilities of the output sequencer. As well as the standard instructions for general digital and analogue output control, the text editor can make more efficient use of flow-of-control statements and has a number of additional commands for specialist operations. The text editor allows the user to set variables and expressions for sequencer instructions in place of fixed values. 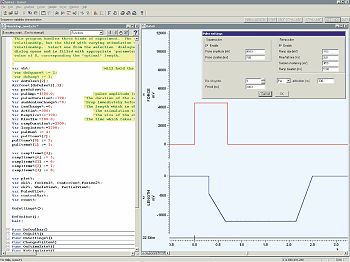 Custom pulse generation from a script and text sequence

A script interacts with the sequencer by sending and receiving variables which represent waveform amplitudes, digital states and timing values. Larger blocks of data, such as a list of pre-recorded spike intervals for stimulus output or a series of event times calculated to produce a linear frequency ramp, can be transferred using the built-in sequencer table.

As an example, in S1-S2 heart pacing protocols where the interval between pulses is progressively reduced until it reaches a defined time or the stimulus induces arrhythmia, a script and sequence combination can provide complete experiment control. The sequencer controls the real-time generation and timing of the pacing pulses while the script acts as a high level 'supervisor', allowing user interaction and updating the sequencer values in response to changes in the incoming data. Once arrhythmia is detected, the script automatically stops the stimulus output. 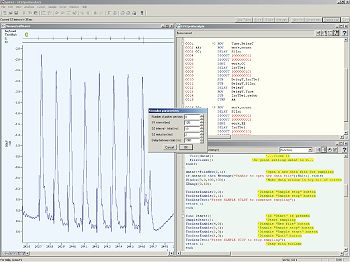 The graphical sequence editor in Spike2 offers a user-friendly interface for the built-in output sequencer. This video tutorial gives an introduction to the graphical editor and how to use it to setup a range of outputs for use during sampling.

For our US customers, we can provide tax form W-8BEN, that identifies us as a UK company.