The Spike2 output sequencer can run complex experiment control and stimulus sequencing protocols during data capture using up to 16 TTL and 8 waveform outputs. Timing is precise as it is controlled at the CED 1401 interface, not the host computer. The output sequencer can be changed while sampling.

Output protocols can be set up in two ways. A graphical editor provides all the functionality most users require, allowing creation of multiple sets of pulse outputs including square pulses, sine waves, ramps, pre-recorded and user-defined waveforms. See a video demonstration. For more demanding applications, a text editor is available in which you can edit the sequencer steps directly. This makes it possible to control the sequence interactively through the script language by use of variables and tables.

The sequencer can access the incoming waveform and event data in real-time, enabling very fast response to changes in waveform levels and detection of events. 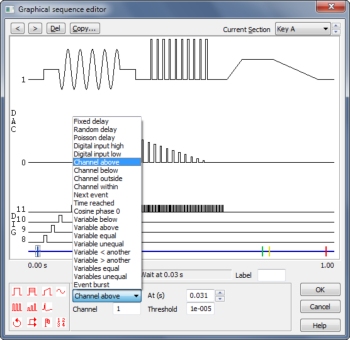 Spike2 identifies and sorts single and multi-unit activity both on- and off-line. It can mark events using simple threshold crossings or sort up to 32 channels on-line with whole wave spike shape template matching of single trace and n-trode data. See a video demonstration.

For multi-unit recordings, Spike2 contains tools for sorting spikes based on the spike waveform shape. All events crossing a threshold are captured. See a video demonstration. A combination of template matching and cluster cutting based on Principal Component Analysis (PCA), user-defined measurements, correlations or errors is then used to sort spikes into different units. Spikes can also be sorted interactively by dragging a line through spikes and classifying any which intersect. Spike Collision Analysis can separate unit collisions by comparing the current spike shape with pairs of existing templates.

Cluster cutting methods plot measured values into a 3D view that can be rotated and replayed to show the occurrence of the spikes through time. Clusters are formed by automatic algorithms or manually by placing ellipses or drawing polygons. Interactive features include INTHs for current cluster classes, tracking over time, and selection of an individual spike by clicking on its dot in the cluster. The graphical sequence editor in Spike2 offers a user-friendly interface for the built-in output sequencer. This video tutorial gives an introduction to the graphical editor and how to use it to setup a range of outputs for use during sampling.

There are a number of parameters used to define how spike templates are formed and how incoming spikes are matched to templates. This video tutorial demonstrates how these settings can be modified using the Template Parameters dialog.

When setting up a new WaveMark channel, the two default horizontal cursors in the spike shape 'oscilloscope ' window are used to set the positive and negative trigger levels for spike detection. This video tutorial demonstrates the 'do 's ' and 'dont 's ' of setting up threshold triggers for spike sorting.

For our US customers, we can provide tax form W-8BEN, that identifies us as a UK company.